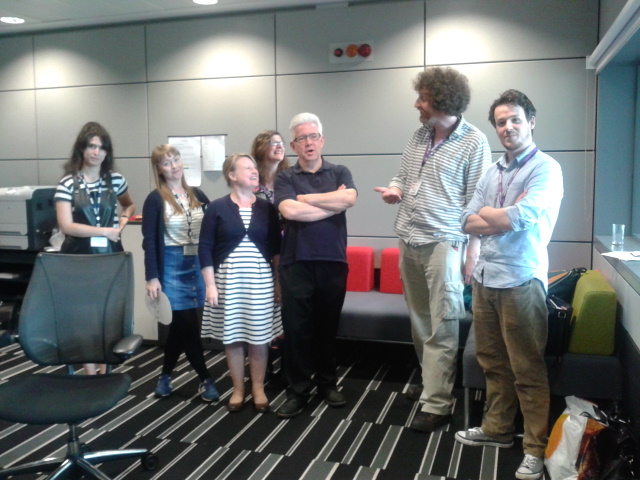 On 13th July 2015 I was delighted to be asked by poet Ira Lightman, a regular on BBC3 The Verb, (http://www.bbc.co.uk/programmes/b061glf9) to collaborate with him on a commissioned poem using Standard Marine Communications Language in ‘dactylic hexameter’. We wrote the poem as dialogue, with me being rescued from the Corryvreckan whirlpool off the west coast of Scotland between Scarba and Jura by Ira, and then us voyaging together to Salford, Manchester.

We were to record at BBC Studios at Salford on Thursday 16th. I took the train to Newcastle where I met Ira and we travelled to Manchester together, returning later that day. The programme went out on Friday 17th.

We were very fortunate to have the spontaneous added atmosphere to our poem of fellow guests the Ballina Whalers humming background as we read. The Ballina Whalers are : Pete Truin, Jamie Doe and Sam Brookes, who sing sea shanties in gorgeous harmony.

South Uist poet Niall Campbell, winner of the Edwin Morgan Poetry Award for his 1st collection ‘Moontide’, published by Bloodaxe, was also on the programme, as well as novelist Susan Sellers who spoke on Virginia Woolf.