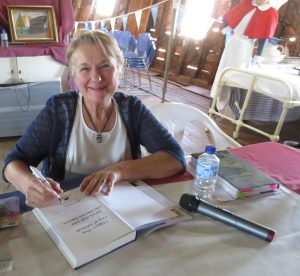 Hello, and thank you for your interest in my website. I hope you enjoy  browsing the various pages that reflect my writing and music interests that began in 2006 and 2009 respectively.

Please visit my Books page and follow the links

A wee bit about me …

I was born in Edinburgh and grew up in Dunbar on the east coast of Scotland. I enjoyed writing stories and essays as a child, and creative writing during my career as secretary/project administrator. The urge to write to be published was strong in the late 1990s.

In 1993 I discovered tall ships on the River Tyne at Newcastle. When I found this was an annual event, I became a ‘tall ships groupie’ and tried to see the ships each year in various ports they visited. I began writing about my experiences.

When the time was right, in June 2006, I attended an Arvon course on Writing for Children, spending a week in the gorgeous setting of Moniack Mhor facilitated by the enthusiastic, energetic Cathy McPhail and Mhairi Hedderwick, mainly known for her Katie Morag stories and wonderful illustrations. I have a stack of stories waiting to be polished up for publication.

Through a distance-learning course with the Academy of Children’s Writers, my series of plays inspired by the Scots ditty ‘Three Craws Sat Upon A Waa’ was born.

Next Performance is https://dunbarbattery.org.uk/2019/07/the-three-craws-an-the-mysterious-licht-at-sunny-dunbar/ though if the weather is poor, we will be in The Bleachingfield Centre, Dunbar https://www.eastlothian.gov.uk/directory_record/254263/bleachingfield_centre

I joined Tyne & Esk Writers in 2005 and have been a member intermittently since then. 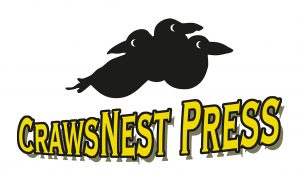 I set up my imprint CrawsNest Press in August 2015 when I was commissioned to write a script for Cockenzie Primary School to commemorate the first anniversary of the landmark power station chimneys being demolished. The title is derived from my passion for tall ships – the lookout post on sailing ships is known as ‘the crow’s nest’ – and also from the Scots ditty ‘Three Craws Sat Upon A Waa’ that my plays, The Three Craws Series of Scripts is inspired by.

‘The Three Craws’ Series of Scripts 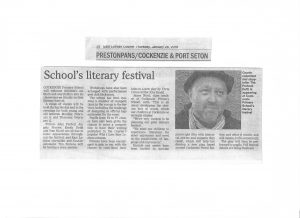 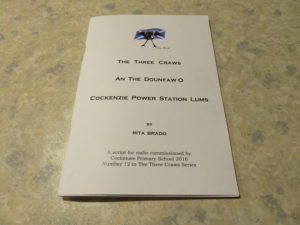 It has proved very popular, selling internationally but mainly at the many readings I have given in Scotland.

Why not visit my Poetry page to see progress since then? 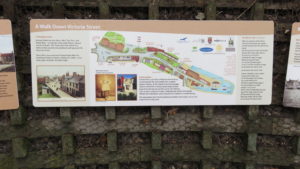 ‘The Herrin Trail’ from the book appears on an interpretation board in Victoria Street, Dunbar on the approach to the harbours. It compliments the sculpture ‘The Creel Loaders’ by Gardner Molloy dedicated to the fisherwomen of Dunbar

In 1999 the book I was writing about my tall ships travels was abandoned when I discovered the plight of 1864 clipper ship City of Adelaide aka Carrick. She became my obsession. I had to know why she was threatened with demolition at the Scottish Maritime Museum at Irvine, in the country of Scotland. My book Clipper Ship City of Adelaide BENEATH THE SOUTHERN CROSS is available to buy from 31 July 2019. A painting by G McMillan from 1991 forms the basis for the dust jacket of the book, supplied courtesy of The Scottish Maritime Museum.

This image was taken on board MV Palanpur, the heavy-lift vessel that carried City of Adelaide from Rotterdam to Port Adelaide, where she is now open to the public as a museum.

The image below was used by kind permission of the artist and the Sunderland City of Adelaide Recovery Foundation for a promotional booklet I designed for use at the MyState Bank Australian Wooden Boat Festival, in Hobart, Tasmania where I was a guest presenter in February 2019.

When I went to see Savourna Stevenson perform in Lennoxlove House, Haddington I was captivated. It was the first time I heard harp music played live. She inspired me to have a go. I’ve derived great pleasure from having the privilege of learning it, and have found surprises along the way. Read more about how I was given the gift of my first harp lesson, and never in a thousand years would I have believed I would one day build my own harp. 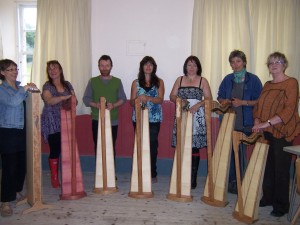 I have had the privilege of working with various artists through poetry, music and film.

All images and text © Rita Bradd 2022
All rights reserved