For international price and p&p enquiries, please use my contact form http://ritabradd.com/contact/

‘Clipper Ship City of Adelaide BENEATH THE SOUTHERN CROSS’  is a very special jacket-wrapped hardback book, fully illustrated on silk-coated paper. It tells of the extraordinary rescue from demolition at the Scottish Maritime Museum of the oldest surviving composite clipper ship in the world, 1864 City of Adelaide, also known as Carrick, by a group of South Australian businessmen whose mission was to return her to Adelaide as a most significant part of the State’s heritage.

As a ‘tall ships groupie’ I discovered the plight of the ship in 1999 in Greenock, during the Cutty Sark Tall Ships Race. She got right under my skin. I delved into her background to find out why she was in this predicament. By chance I discovered a diary existed that was written on the maiden voyage in 1864, by a young woman. This made me determined to accompany City of Adelaide to record her last ever voyage in tandem with that written on her first one.

The history of the ship, the serendipities, and how I followed City of Adelaide through the events that preceded her departure from the United Kingdom are woven through the chapters that lead to the record of the maiden and final voyages themselves. The ship was towed on a barge from Scotland to Rotterdam to be prepared for her 14,000 mile sea voyage to Adelaide, as cargo on the top deck of a heavy-lift vessel. I literally cast my fate to the winds, as I had no idea how long the voyage would take, or what our route would be. My story took a surprising, intriguing twist that influenced me to include memoir in my maritime adventure, when I discovered the nationality of the crew of the cargo ship.

In February I was a guest presenter at the MyState Bank Australian Wooden Boat Festival in Hobart, Tasmania where I also had a stall promoting my book. When I got back I had the fascinating experience of sitting with my book designer as he wove his magic onto the pages. I launched the book in August 2019, and have held several signings across lowland Scotland, including the Clydebuilt Festival held at Riverside Museum on the weekend of 21/22 September. Plans are afoot for a sequel in time.

My friend Ray [whom you met on the day] was most impressed: not only with your book but your gutsy determination that made it all happen and so professionally … Alan Beaton

The Book launch! Or more specifically: the BOOK! is incredibly impressive. I loved your descriptive style, the interplay between the images outlined by the author and the core subject the Clipper that has willingly absorbed your life. At page 5 you wrote: her Captain, a sea cadet aged around 13 years who disappeared into the West Coast of Scotland so reminded me of a similar experience when I learned knots and spliced aboard the Carrick at around that age.  Congratulations for your choice of paper and printing, the whole effect is impressive and particularly so is your use of language, the interplay of Scots’ “drooling and shoogling” added greatly to the presentation. An excellent book … as Burns would have said “ weel done Cutty Sark! … Alan Beaton

Absolutely spectacular book Rita! It’s beautiful & so stimulating to read more! It’s such a clever book on so many levels. It’s a great read. … Meredith R, great-great-granddaughter of Captain Bruce

“I read the book over whilst tranferring our yacht to new moorings. It is addictive!” … Heather, Scotland

“The book is addictive! I could not put it down and read it within three days.” … John D, Scotland

“I’m thoroughly enjoying it, so different from anything I’ve ever read before … brings so many emotions to the surface.” … Frances M, a book group, England 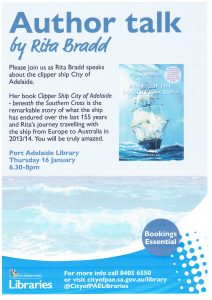 Launch of ‘Clipper Ship City of Adelaide BENEATH THE SOUTHERN CROSS’ on board the clipper ship moored in Dock 1, Todd Street, Port Adelaide, South Australia. 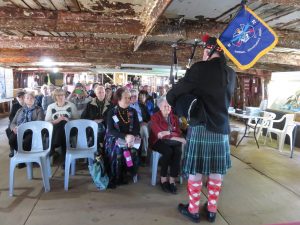 Des Ross, Commander of the Clan Ross in Australia, pipes at launch of ‘Clipper Ship City of Adelaide BENEATH THE SOUTHERN CROSS on board the clipper in Dock Two, Port Adelaide.

The top row references Glenlee, the Tall Ship at Glasgow. 1999 is when my story with City of Adelaide began. Twenty years ago!

The lady Lord Provost stopped by to chat to stallholders. We were taken outside on the 21st as the weather was so hot. You can see by my hair it was windy! On Sunday, we were in the Workshop as it was teeming down.

Dragonboats raced, and there were great outdoor activities. 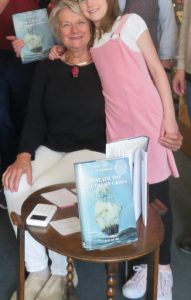 Update in an email to me today on the award mentioned below from the radio show Executive Producer, Helen Meyer –

‘We’ve been asked by The Community Broadcasting Association of Australia to re-schedule it for broadcast on their Community Radio Network that goes out to over 450 Radio Stations the length and breadth of Australia.

It’s a fantastic interview and two marvellous stories! Thanks for sharing with us. We will have our Feisty Women get-together when you’re back here again.’

Here’s the link to the interviews – http://radioadelaide.org.au/2019/05/20/kate-rita-fiona-3-fiesty-women-a-small-canvas-plane-a-derelict-ships-hull/ 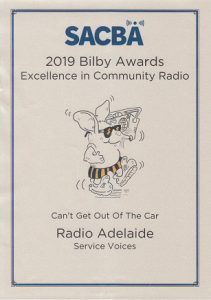 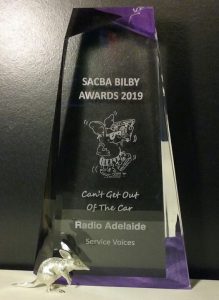 When I was in Adelaide earlier this year I was at a party and mentioned to Helen Meyer that I had enjoyed listening to the fascinating story of Kate Clements flying from Edinburgh to Adelaide in 1968 with her husband, as newly-weds. I had been interviewed by Helen on Radio Adelaide in 2014. She invited me to do a joint interview with Kate in March 2019, which was really fun and pleasant … and I’ve just found out the interview has won a prestigious award!

Extract from an email to me –

The award ‘Can’t Get Out Of The Car’ means it is so good that if you’re listening whilst in your car, and you reach your destination, you don’t want to get out of the car because you want to listen to the end. When the award was announced and they played a portion of Fiona’s interview with you and Kate, the crowd all began calling loudly for more of the interview to be played. Apparently that’s never happened before!

So congratulations to all of us. Fiona, Kate, Rita, Service Voices, Radio Adelaide.

I travelled to Newcastle this afternoon to join TS Royalist to present a copy of Clipper Ship City of Adelaide BENEATH THE SOUTHERN CROSS to the ship. I first discovered the plight of the ship after a sea cadet gave me a flyer at the tall ships race at Greenock in 1999. That set of a 20-year and ongoing, passion for the ship. I climbed the rigging to present the book to Flynn a cadet who had just joined the ship. I was given a tour of the ship and saw the catalogue of the build of the ship at Figueras, Spain in 2015. I hope to upload photos once I increase the capacity of this website.

My presentation and book launch in The Artiscience Library, Summerhall, Edinburgh was packed with people who enjoyed the event, punctuated with cake decorated with my book cover. It was a lovely event in a fantastic environment, with impromptu musical background at start and end provided by my son Wesley. 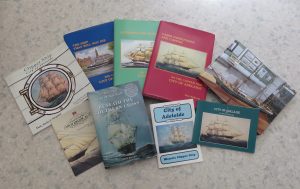