My debut booklet of poems is mainly inspired by the coastline of East Lothian where I grew up, the Lammermuir Hills and Berwickshire. Some poems are in Scots, including my well-travelled poem ‘The Herrin Trail’ that was shortlisted for the McCash/Herald prize in 2011; has been published in video; on interpretation boards complementing ‘The Creel Loaders’ sculpture in Dunbar by Gardner Molloy commemorating the women who carried herring over the hills from Dunbar to Lauder; on a banner celebrating the suffragette movement NOW 14-18 ‘100 Years 100 Banners’ programme; as a ‘Sma Buik’ by Poems-for-All in California; has been published in anthologies and newsletters, and has been set to music on clarsach (small lever harp). Other poems reflect nature, moments of memory, family, and the present. 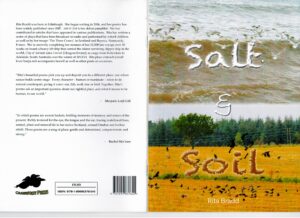 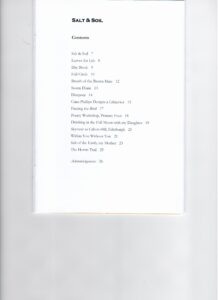 I am a latecomer to writing poetry, my journey began in 2006. I write mainly in free verse, and sometimes in Scots language. Most of my poems have been published in anthologies as a result of submitting to competitions or by invitation. Inspiration comes to me from many sources: nature, mundane inanimate objects, animal abuse, family, social issues – anything at all! Discovering the poems of Adrian Mitchell in 2006 at Moniack Mhor brought a whole new dimension to my earlier experience of poetry in schools.

Here are the anthologies I am published in, with Salt & Soil. It’s been a while since I submitted to any publications.

I have also been most fortunate to have poems published in public spaces: on a banner commemorating the suffragette movement, in tiny books, as postcards, in windows, as film poems, on BBC radio and local community radio stations in Scotland and Adelaide, South Australia. I love poems being off the page where they are accessible to people who might not otherwise experience them.

The first four lines of ‘The Herrin Trail’ are carved in stones and set in the ground beside the interpretation board that contains the complete poem, near the sculpture by Gardner Molloy, ‘The Creel Loaders’ in Victoria Street, Dunbar. 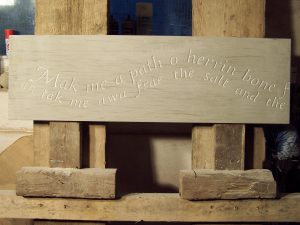 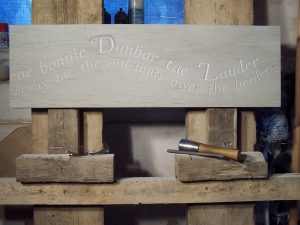 Site visit in September 2015, early progress on the stone

I was very proud to produce my own poetry booklet ‘Salt & Soil’ under CrawsNest Press, launched in August 2017. Copies have  sold internationally, and the booklet is approaching a fourth print-run.

Some of my most delightful inclusions

One poem that has taken a life of its own, is ‘The Herrin(g) Trail. Written in Scots it has appeared in many forms and was short-listed for the Herald/McCash poetry prize in 2011. In grand company on the short-list here … 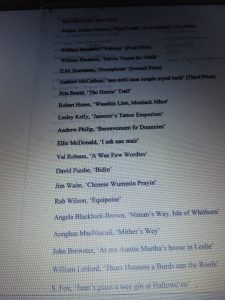 Here it is on the stunning banner created by Dunbar Dementia Carers Support Group with Fiona Hermse of Luminate. I had visited this wonderful, talented and fun group on several occasions to share my poetry and harp music, and was honoured to have my poem included on their banner, commissioned by Artichoke 14-18 NOW WW1 Centenary Art Commissions 100 Years 100 Banners PROCESSIONS and designed by Fiona Hermse. Some of us marched in Edinburgh on 10 June 2018 along with thousands and thousands of others marking the anniversary of women gaining the vote.

Here is a link to the entry for StAnza 2016, the Scottish International Poetry Festival where I played clarsach (small lever harp) at the opening ceremony, and was fortunate to have ‘City of Adelaide Bleeds‘ featured on a loop. My poem Sunny Dunbar was published on their poetry map of Scotland a few years ago. 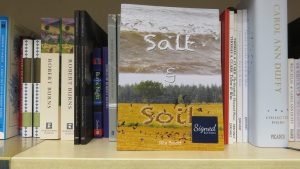 I was delighted to be asked to assist with judging Craigmillar Writers Group poetry contest. The poem below is by Billy McKirdy. Although not a winner, I put it forward as for me it truly captured the essence of gorse, known as ‘whins’ in Scotland. Thanks to Billy for allowing me to publish it here.

A yellow green gorse
Clothing and dressing the slopes
A sight, a haven
Thick, deep and densely
Protecting, embracing life
Within it’s cover
A perfume, so sweet
Tantalising and lovely
Pleasing the senses
Eternally here
Even in fiery death
It lives on again
We see it and smile
Its beauty and its presence
This yellow green gorse

I was really privileged to be asked my Alastair Cook to run a Filmpoem poetry workshop for children, commissioned by North Light Arts. The group of children and I walked around Victoria harbour Dunbar and environs, seeking inspiration from various finds, such as pebbles, shells, crab nippers, seaweed, berries, birds. The children wrote words onto strips of paper they took back to the Town House where they composed their poems from their cache, then read them as they were video-ed. Unfortunately the film seems to no longer be available. http://filmpoem.com/filmpoem-childrens-workshop/