Skip to content
Following a visit to Innerpeffrey Library in 2017 to hear a talk on The Scottish Diaspora Tapestry with a friend from Adelaide, I received a request to give an illustrated talk to Friends of Innerpeffray Library, near Crieff, Scotland.
Thanks to Friends Of Innerpeffray Library Programme, I took this from their page of events for 2018 on their website  https://friendsofinnerpeffraylibrary.com/meetings-and-events
“8th August   Rita Bradd:   The Final Voyage of Clipper Ship City of Adelaide (1864)
The remarkable story of one woman’s obsession and how far she was prepared to go to see it through was the subject of the August talk. Poet Rita Bradd’s passion for tall ships led her to HMS Carrick, a dilapidated old wreck of a 19th century clipper ship which was slowly disintegrating at the Scottish Maritime Museum at Irvine. However, this particular clipper, the oldest surviving clipper in the world, has a fascinating history having started life as a migrant ship called City of Adelaide. When she was scheduled for demolition, the city of Adelaide in Australia won the bid to save her and arrangements were made for her to be transported across the globe on a massive cargo ship, MV Palanpur.

Panel AU27 of the Scottish Diaspora Tapestry showing the City of Adelaide. This was stitched by Rosemary McKay and was part of the display at Morrison’s Academy in 2017.
Read more at: http://www.scottishdiasporatapestry.org/au27-the-city-of-adelaide
Rita had been following the fate of the ship and applied for permission for accompany her on her final voyage. Thus began an intrepid 22,000 km, 10 week journey to see the ship safely delivered to her new home. Thanks to her extensive research, Rita was lucky enough to source a copy of a diary written on the ship’s maiden voyage and she has written a parallel diary of her own to commemorate this momentous trip. Rita’s talk links back to last year’s FOIL talk and exhibition about the Scottish Diaspora tapestry which featured this  panel which depicted The City of Adelaide in her heyday.”
I was given a tour of the library in the early afternoon and saw many books, some hundreds of years old, and interesting items on display. Following the talk, I was granted lifelong membership of the library and was presented with a beautiful floral bouquet.
Check https://www.facebook.com/ClipperShipCoA/ for the continuing story of City of Adelaide

It was Friday 15 November 2013 when I came home from buying groceries that I found the email I was waiting for! Shipping Agents Peters & May https://www.petersandmay.com/  granted me permission to voyage with 1864 clipper ship City of Adelaide from Dordrecht, The Netherlands to Adelaide, South Australia! Two years of agony waiting for that  to come through, over in just a few seconds of reading the message.

‘I collapsed to the floor and sobbed! What had a I done? … ‘ (extract from my book, coming soon)

Keep watching for what happens next!

Above are some images from the Parade of Sail.  People and boats come from all over the world for this exciting event.

One of Captain Bruce’s great-great-granddaughters invited me to the Australian Wooden Boat Festival which is held every two years in Hobart, Tasmania.  I was so excited to be going back to Adelaide as my first port of call, especially as I was giving two talks on board City of Adelaide, on the weekend of 3 and 4 February.  I was met at the airport by my lovely, generous hosts Ian and Jeanette, who are always very welcoming, fun and helpful, and friend Rosemary who was waving the Saltire.

I could hardly contain myself the next morning when we went to Port Adelaide to see the clipper ship.  She is still sitting on barge Bradley, however a good amount of work is going on inside the hull, such as scraping off the old paint from the iron beams in the ‘tween deck and painting them with the original colour from 1864, planning out for replica 1st class cabins.  New windows have been fitted into the stern where Captain Bruce’s cabin was, as well as a very smart new South Australia Coat of Arms.

It was such a thrill to have two fantastic musicians involved with the first talk.  I had understood City of Adelaide‘s honorary piper, and Commander of Clan Ross in Australia would not be able to come along for the evening.  As I immersed myself in the sights, smells and feel of the ship in the ‘tween deck where I was giving the talks, I heard the lilt of the pipes permeating through her planks.  I rushed out and saw Des in finest regalia, playing the pipes.  I was also hugely honoured that Adelaide-based international singer/harpist Siobhan Owen accompanied me on her clarsach (small lever harp) with my composition City of Adelaide : Farewell to Scotland whilst I read my poem City of Adelaide Bleeds before launching into my presentations to a well-attended audience.

I was lucky to meet Siobhan again in Edinburgh during the Festival Fringe in August 2017, when we repeated our performance on two evenings. https://siobhanowen.com/

I am feeling very nostalgic tonight. Celebrations are taking place tonight on board Bradley Barge on which sits the wonderful, oldest surviving clipper ship in the world, City of Adelaide aka SV Carrick with whom I voyaged on board MV Palanpur. I say “whom” because she is a living, breathing entity.

On our voyage I wrote a diary in tandem with that of someone who was on the maiden voyage in 1864. Her Day One was 12 August 1864, my Day One was 26 November 2013, leaving Rotterdam en route for South Australia. This is an extract for 7 November 1864. This was her day 87, the final one in her voyage from Plymouth, England to Port Adelaide, South Australia. Our diaries are the core of my up-and-coming book which I’m bringing to a conclusion now. Keep looking back for more news. You are most welcome.

“A beautiful day.  I woke about 5am and saw land from the porthole.  We went on Deck nearly  an hour before breakfast.  The land at first looked rather low and barren.  We were busy packing in the morning.  After lunch addresses were presented to the Captain and Doctor.  We anchored about noon.  The health officer came on board immediately ……..” 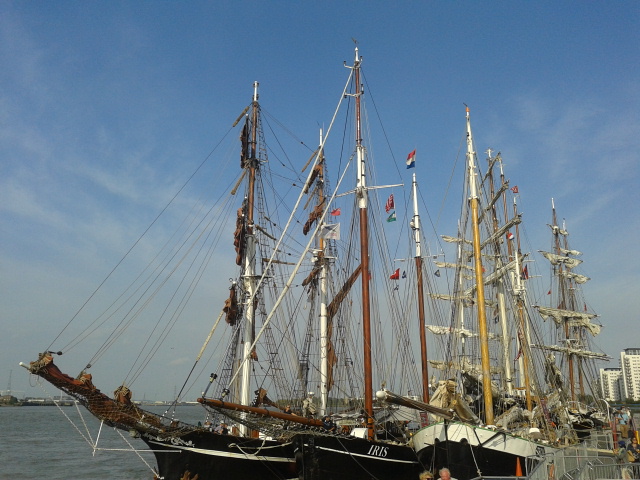 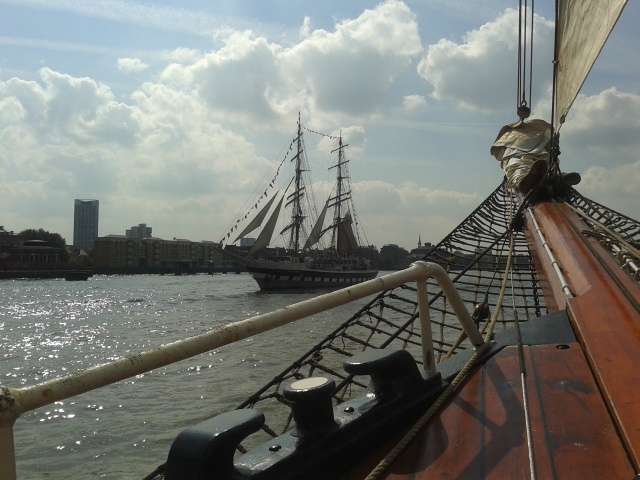 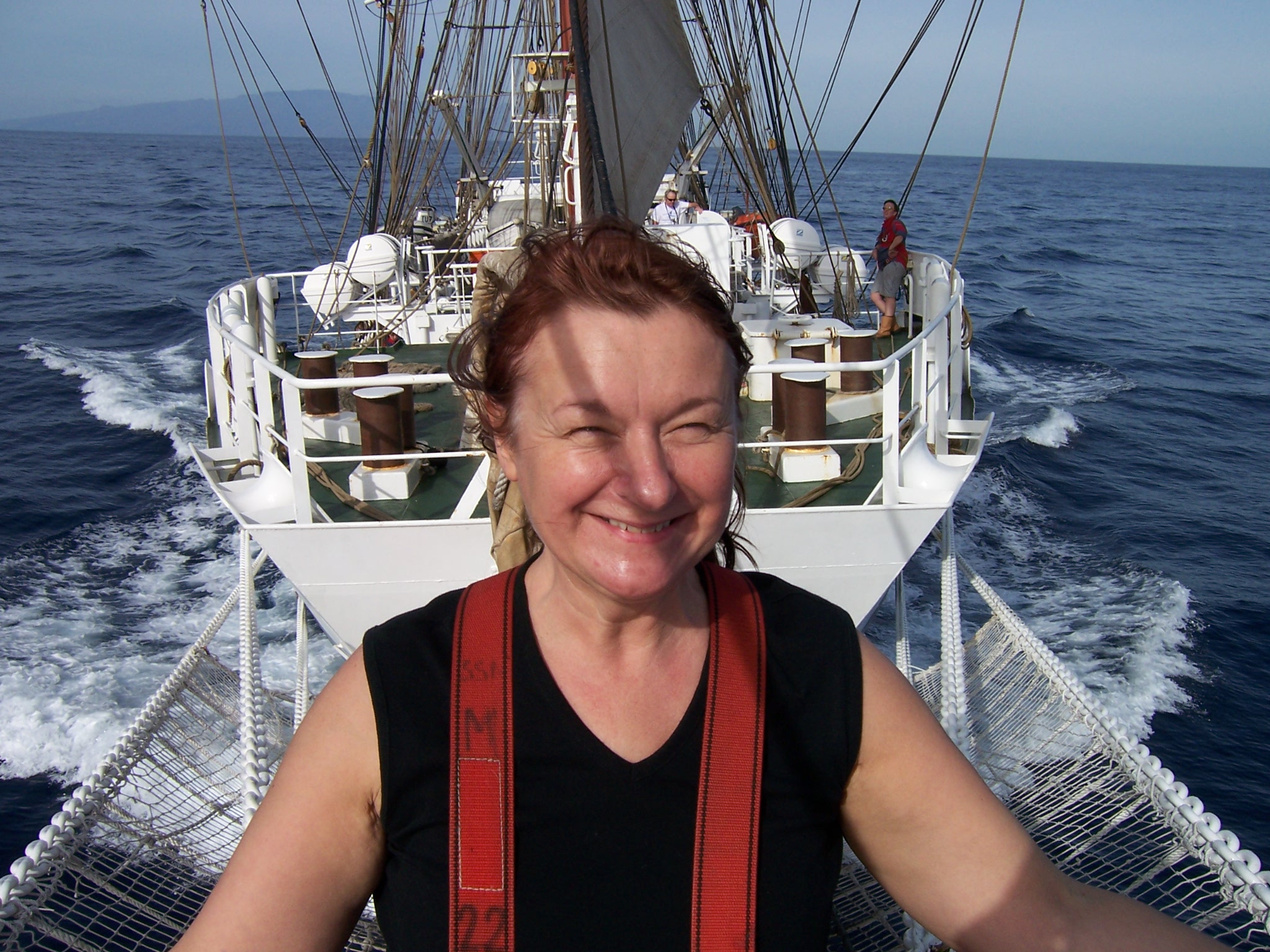 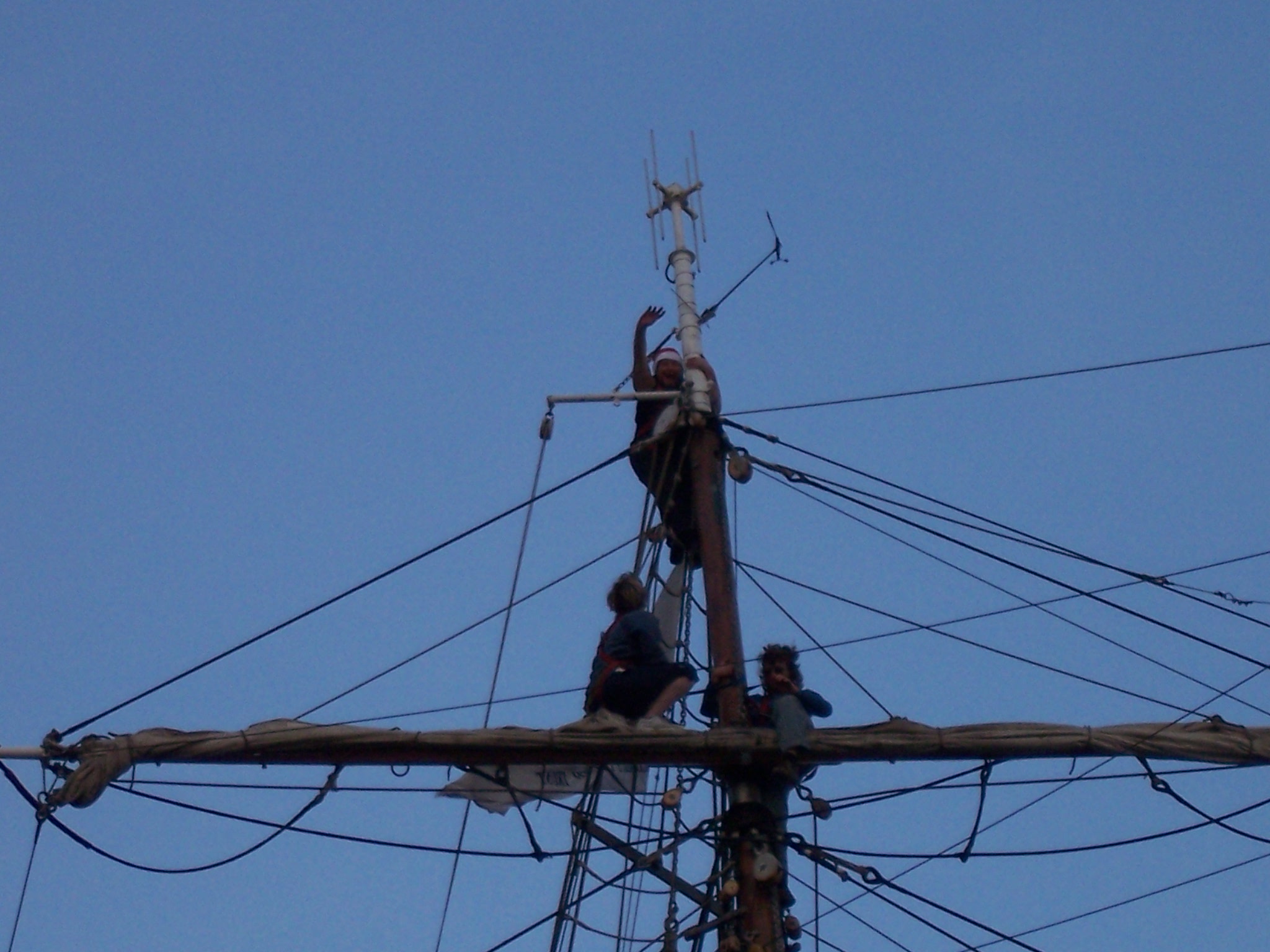 Am off soon to Greenwich for the Tall Ships Regatta from 4 to 10 September.  So looking forward to it.  It was at Greenwich last October that City of Adelaide was renamed from Carrick back to her original name by the Duke of Edinburgh. 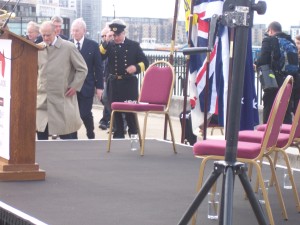 Thanks Angie Townsend! Looking forward to being on your show on online community radio Radio Saltire – www.radiosaltire.org – next Wednesday 27 August 2014 between 6 and 8pm to talk about my writing, journey from Rotterdam to Australia with clipper ship City of Adelaide. Taking my clarsach along to play a tune or two. Come and join us!

1.  This afternoon I was in Edinburgh for Bizarre Guitar and Terse Verse.  Outside the Blind Poet I passed two girls.  One had pink and blue hair.  I heard her say ‘Adelaide’.  I stopped dead in my tracks and spoke to her.  She had come across especially to take in the wealth of Edinburgh Festival.

2.  I caught a wee bit of Ade At Sea (http://www.itv.com/presscentre/ep1week12/ade-sea) and lo and behold, after a map appeared with Plymouth on the map, he visited the Eddystone Lighthouse.

150 years ago today City of Adelaide picked up passengers from Plymouth and set off for Adelaide, South Australia on her maiden voyage.  Diary entry for 12 August 1864:

A beautiful day.  About 9.50 A.M. a boatman came to tell us that the City of Adelaide was in sight.  Tom and I took a walk and bought several little things.  At 1 P.M. we took a boat and sailed to the ship.  Blanche and I wrote letters to the Patersons.  Tom stayed on board for about two hours.  We sailed at 4 P.M.  We stayed on deck till after we had passed the Eddystone Lighthouse and then went down to bed but not to sleep.  We were dreadfully seasick during the night.

This is Day One.  My diary of City of Adelaide‘s final voyage as cargo on the deck of heavy lift ship MV Palanpur begins on 26 November 2013 and is written in tandem with this diary from the maiden voyage.

This image is taken in Rotterdam, City of Adelaide has been wrapped in plastic after being fumigated to conform with quarantine regulations for Australia.

Last night I read at the Blind Poet pub in Edinburgh during a 5 1/2 hour marathon of spoken word put on by Blind Poetics (www.blindpoetics.com).   My slot was placed amongst bards from the Federation of Writers (Scotland).   I spoke briefly about my voyage on board MV Palanpur with our precious cargo clipper ship City of Adelaide taking her back to Australia, and shared a few poems written on the voyage.

Today I spent a worthy afternoon in the company of Bil & Cyn at Edinburgh Fringe, in the Blind Poet.  For the last few years they’ve had their own show called Bizarre Guitar and Terse Verse, a wonderfully balanced duo act of poetry and jazz guitar (www.bil-cyn.com).  They introduced me to their friend and guest musician Les Ray (www.leslieray.co.uk) who is also a freelance writer and musician, and is involved with the Cambridge Folk Festival.  All three are coming to my house tomorrow, bringing their guitars and voice.  So looking forward to that.